"Missouri! Wishing there would be one of the old “Reasons to Hate” features for the Missouri game. Ever since Mike came back there has been some serious smack talking from the Missouri fanbase. I have slowly grown to very much dislike the Tigers, having really not given them much thought before. Hoping with all my might for a win tomorrow." -Gullinbursti

We're done with Valentine's Day and all those loving feelings we've been sharing with our female Razorback fans. We're done with the glow from the 2nd road win of the Anderson era. It's time to move on to our favorite emotions and our REASONS TO HATE the Razorbacks' upcoming opponent. It's a Missouri Saturday, so like a wise old man once said, let your hatred flow:

1. "Mizzou" What a terrible name. I once went to a conference that featured a fight song competition. Our group performed The Arkansas Fight Song and William Tell and when the awards were announced, the judges poked fun at the perceived education rankings (Actually ranked #5 in the country) and gave us the spelling award because they were so impressed. Of course no Arkansas fan could fail to spell A-R-K-A-N-S *boom boom* A-S after attending any razorback sporting even, but Mizzou needs to shorten their name and mar and disfigure the spelling for some strange reason. In case you were wondering, the correct response to "Go Mizzou" is "Bless you!"

"You talk a lot about family and loyalty and you left behind seven seniors at Mizzou," KOMU reporter Dani Wexelman began. "But why was there no goodbye to Mizzou fans and the community you’ve been with for five years?"

"We did a press release and that was to all the fans," Anderson responded. "I always made sure they knew, this coach and from our staff, that they were instrumental in what took place. I thought we addressed that. I may not have done it personally, but I did it in a press release in terms of thanking the fans, thanking the administration.

"You didn’t think you didn’t need to address the community personally?" Wexelman continued.

"Columbia was great to Mike Anderson," Anderson said, as boos rang out from Arkansas fans in the arena. "Nah, nah, nah, it’s legit, it’s legit. I was part of that community."

3. Not the last game, but the game before... We won the last game we played against the Tigers in 2007, but go figure, that was a home game. We ended up losing to the Tigers in Anderson's first year and Heath's last year (that was an Arkansas NCAA tournament team that lost to 8 seed USC in Spokane at the end of the season). Gotta remember every loss.

4. 3/5/13 - Gonna have to go ahead and mark the away contest at Missouri as a loss and start hating them for it now. Can't expect to win on the road.

5. Football - We're going to swap South Carolina for a yearly matchup with the tigers, and all manner of KFC and Cocks jokes will be lost to us. AND it means we have to play 3 tigers a year, which is terrible for creativity. It's also been rumored that we're going to lose our post Thanksgiving Tustle with the tigers, which has been one of my favorite games since the Miracle on Markham. Oh and 2007 where Missouri just gave us an even worse end to an already terrible season.

6. Quin Snyder - This guy took a pretty decent program built by the great Norm Stewart and absolutely drove it into the ground. He played at Duke which makes him easy to hate and then coached as an assistant under Coach K and then moved to Missouri. Watching him on TV was terrible. He was gross and sweaty and looked like a little weasel. Glad Missouri isn't some great powerhouse now, but seeing him torture a program and a fan base for that long and them letting him do that is a great reason to hate. 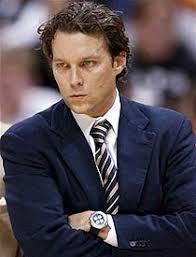 7. Hey Baby - I went to Columbia once. I was playing in the band for the women's volleyball team as they played in the NCAA tournament. We drove 5 hours to get there and beat an undermatched Saint Mary's team before being bludgeoned in 3 games by a stout Tiger team. The band director for the Arkansas team saw the end coming and let us have a little fun. He called up Hey Baby, a usual crowd pleaser, and you would've thought that someone had burnt a Mizzou Tiger in effigy. The response was tremendous as boos rained down upon our band. The Mizzou fans, apparently being unaware of the songs current 52 year legacy, couldn't imagine another fanbase or band swaying and enjoying the beautiful song that simply asks that makes that age old statement "I wanna know if you'll be my girl"

8. Geography - Mizzou was asked or maybe they begged to join the SEC and they were welcomed to balance Texas A&M in the East... What? There are 4 teams in the SEC West of the Mississippi River. There are 4 more teams that are considered west that are across that divider of East and West, and yet Mizzou is in the East? What a head scratcher. Plus 5 hours is maddenly close enough to expect Tiger fans to attend in droves when we host them in football every other year. I liked the other Columbia where they didn't come. Hate to say it, but I love it when another team and their fans don't even show up in Fayetteville. Plus you know they're going to be in town today and in the basketball palace of mid america. They'll take their pictures in front of our beautiful campus. They'll get to enjoy our food and seeing our beautiful women. Maybe they'll hate themselves a little bit after they see how great we are...