Share All sharing options for: Arkansas vs Clemson, Stat Sheet

Mike Anderson and his Razorbacks head into the game against the Clemson Tigers with a lot of momentum and a 5-2 record. Following an impressive blowout of Southeastern Louisiana, Clemson will be the toughest team Arkansas will play in the month of December. Leading scorer K.J. McDaniels (18.8 ppg 6.4 rpg) is a streaky shooter from outside but is very athletic at 6'6 and can get to the rim at will. He settles for outside shots at times. In the  loss to UMass earlier this year he did not heat up until late in the game. It will be an interesting matchup with Michael Qualls on McDaniels as they are very similiar. A key component of the game will be whether Qualls is able to handle McDaniels, and how he shoots from the 3pt line. 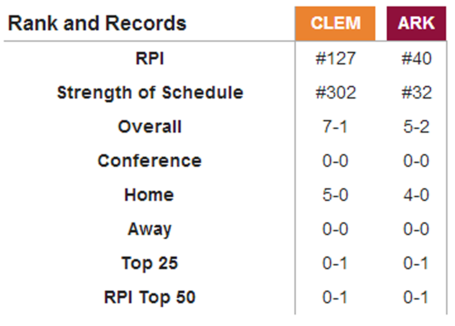 Arkansas has the more impressive RPI, and Sagarin ratings, and most importantly strength of schedule. With all the criticism that Anderson was getting for the weak out of conference schedule, the SOS is looking good for this point in the season. Playing Minnesota, California, and Gonzaga helped a lot. Beating an ACC team that still has to play Duke, North Carolina, etc will boost this even more.

Clemson would rather play a half court game mostly but PG Rod Hall does like to push the pace on occasion. Look for Arkansas to have a lot of opportunities in transition off of turnovers.

Offensive and defensive boards will be the story of the 2013-14 Razorbacks. Qualls is currently the leading rebounder averaging 5.9 per game. Its always difficult for a team to win if they lose the rebounding margin, and Arkansas is only +1.3 so far this season. Clemson is +8.0 in rebound margin, and their only loss so far was to UMass who out rebounded them 44 to 40. UMass is a very similiar team to Arkansas in style of play, running a fast paced style and looking to press full court. UMass Coach Derek Kellogg is a John Calipari protege and plays a style like Kentucky that is uptempo. 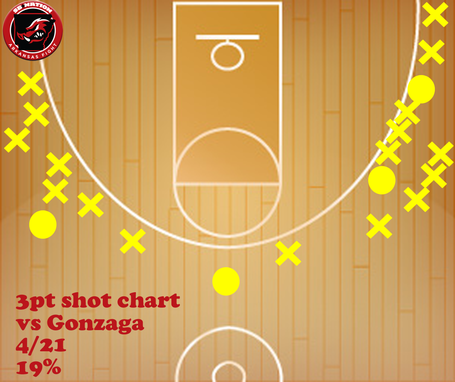 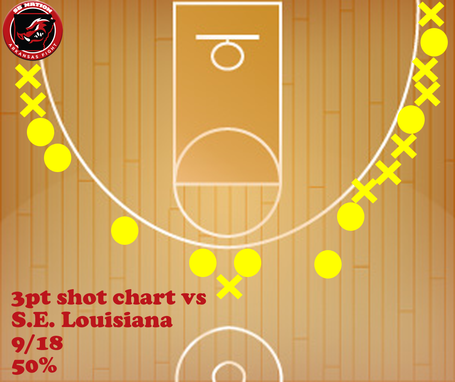 Two things Arkansas must do to beat Clemson:

Defensive Rebound: KJ McDaniels is a very good rebounder from the forward position. Keeping him off the Offensive boards will be a major factor in the game. McDaniels gets his game going off of blocks and put backs so staying solid on the glass will slow him down.

Shoot 30% or better from 3pt: In the shot charts above it is apparent that Arkansas shot much better against Southeastern Louisiana. If they can hit the 30% mark, the inside game for Bobby Portis and Moses Kingsley will open up.