SEC Defense Ranking: Nowhere to Go But Up

Coaches changed, but Arkansas solidified its position as the SEC's least effective defense. Most of the league got worse in 2013, and even Alabama is not quite bulletproof.

Share All sharing options for: SEC Defense Ranking: Nowhere to Go But Up

We present the November 2013 version of our SEC Defense Magic Quadrant.

Market research firms use "vision vs. execution" X-Y charts to divide vendors in four groups. The most limited players are relegated to the lower left corner -- typically the smallest players, struggling to compete against the big boys. Everyone aspires to enter the upper right quadrant, vaingloriously dubbed "Leaders." These, naturally, are the players who already dominate.

A similar exercise helps portray differences between football teams that are hard to discern by just staring at a table of weekly statistics. For our main chart, we use two measures: Touchdowns allowed and yards allowed. But we adjust these stats for the number of opportunities -- possessions, how many times the defense goes onto the football field to fend off a drive. Teams vary in numbers of plays per game - usually due to tempo and run-pass mix. Distilling down to possessions cuts through the noise to get at the number of scoring opportunities.

Traditional football stats tell you stupid-looking things. Example: Arkansas ranks eighth in the 14-team SEC in what's known as "total defense." That's yards allowed per game. Arkansas, which has given up a league-high 35 touchdowns, has a better defense than six other conference mates -- including Missouri and Auburn? Of course not. 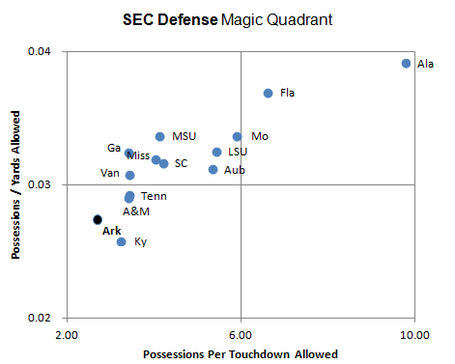 Naturally, one would expect -- pass-pass teams, hurry-up teams -- they should put more pressure on their own defenses. Possessions, good or bad, end sooner. More are crammed into games. That's why run-oriented Arkansas dominates the SEC on defense: The Hogs face the fewest possessions in the league.

Uh. Wait. Fewest possessions - not fewest plays. The Razorbacks have the hardest time of all, trying to get the D off the field. Why? Try the Golden Sombrero of football: Worst pass efficiency defense, and worst rushing defense.

Leaders quadrant: Alabama and Florida, with the Tide clearly way ahead of the rest of the conference.

Challengers (upper left): Here we find the bulk of the SEC. Missouri, LSU and Auburn are closest to top tier but allow a few too many big plays, the key factor that divides men and boys.

Combining few yards allowed and few scores is the stuff of greatness. The opposite end of the universe...Heeeeere are your Arkansas Razorbacks!

Only Kentucky gives up more yards per possession. (That is almost 39, to the Hogs' near-37). On average, the typical friggin' drive, the Cats' and Porkers' foes cross midfield and then some. Arkansas has that extra special level of surrender that pushes its defense under the bottom in points leakage.

The Defense Magic Quadrant explains a lot about other SEC teams: 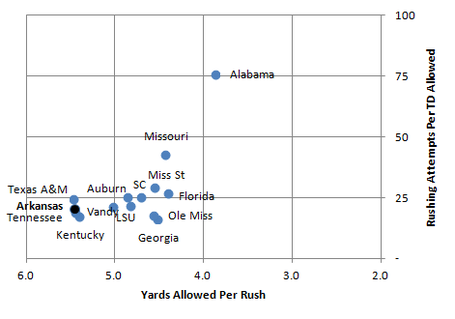 This time around, we brought a second chart to illustrate an unusual migration in Southeastern Conference football. Here we portray rushing yards allowed per carry (with sacks extracted, because hitting defenseless Carta-Samuelses is not run defense) against rushes per touchdown allowed. The perennial bar of greatness is 4.0 yards per rush. Under 4.5 is pretty decent. Once run defense passes 4.5 yards per carry, things deteriorate fast.

This is either a great season for running backs, or an awful one for run stoppers in the SEC. Most of the league is gushing ground touchdowns. Five teams are allowing more than 5 yards per carry. Five more are in that 4.5-4.9 danger zone. Based on this one piece of evidence, let me too-hastily speculate that the SEC is going to eat some serious dirt in bowl season.