Analyzing one aspect of the Mississippi State game that actually went consistently well.

The 2013 season has basically boiled down to trying to find positives among the sea of negativity. Against Mississippi St. it was all too apparent to anyone who watched the game where this team's strengths and weaknesses lie. I'm not interested in breaking down any of the same old negative stuff, it would be much too painful. One thing to look for next year that was used extensively in this game was the WR reverse. 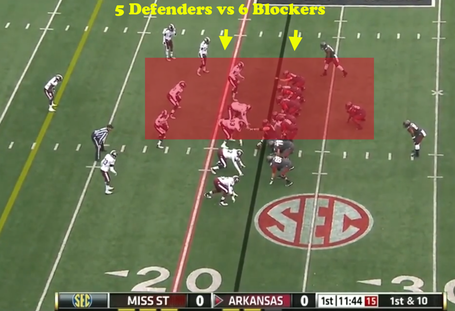 If you’re a great run team, you need constraints that attack safeties and linebackers who all cheat by formation and post-snap effort to stop your run game. You must have the counters, the screens, the bootlegs, and the quick passes,(and reverses) which work best when the defense gives you the structure. -Chris Brown,Smart Football

This formation is unbalanced with three tight ends in the game. Mitchell Loewen #89 is the ineligible TE covered up by Hunter Henry on the right side of the formation. He weighs over 270 lbs and is basically another offensive lineman. The theory is to use the reverse fake, and subsequent reverse hand off to catch the linebackers and defensive ends cheating. This play which Kody Walker runs for 14yds, is Coach Bielemas bread and butter power-O. Walker has the pulling guard Dan Skipper, and FB Kiero Small leading through the defenses B Gap creating enough room for the first down. 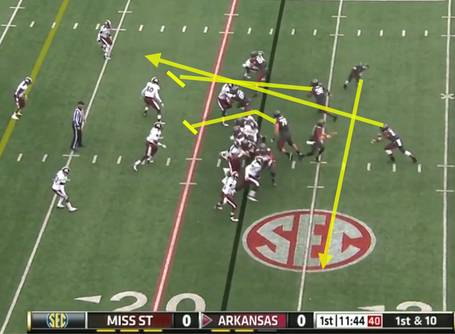 C- Double the 1 Technique or nose

RT- Block down to G/C double to then to LB

The very next play Arkansas lines up in the same formation, but actually runs the reverse which catches Miss. St. cheating toward the inside. 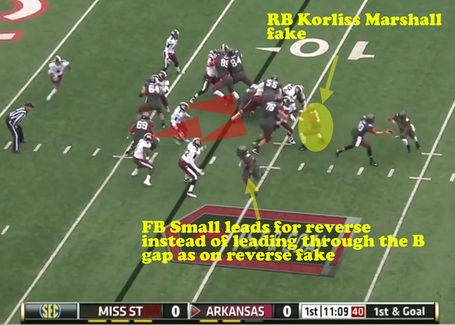 Chaney calls the first  three plays of the second half with reverse action. Keon Hatcher for a gain of 6, then Jonathan Williams on the same power play that Kody Walker ran in the 1st quarter. At this point Miss. St. shifts their weakside DT to the playside 1 technique on the Center. This gives a better matchup, but Williams is still able to gain 11 yds anyway. Still OC Jim Chaney calls it again, and by the seventh time the Bulldog defense was able to stop Williams for a 1 yard gain. Chaney went away from the reverse action and was forced to punt.

Jared Collins comes up with a big INT on the next posession and Arkansas OC still keeps away from the reverse action but is able to pick up a first down at the Miss. St. 22. He then goes back to the same play Herndon scored on but this time with Julian Horton on the reverse TD.

After the Bulldogs tie the game up, guess what play on 1st down we see again. Yep same old reverse action in the backfield and Jonathan Williams is able to pick up 4 yards. First down after Hunter Henry catch, yep inside zone run with reverse action. Drive stalls on a penalty and Arkansas punts.

Defense gets another stop, and the Razorbacks have the best drive of the season down to the Miss State 12 yd line. Alex Collins fumbles on the same power-O play with WR reverse action that they ran all game.

In overtime after Miss. St. scores, you would think they would run either the reverse to the WR, or at least fake it on 1st or second down needing a TD to tie right? Nope four and out game over.

Why not stick with what kept you in the game so far?

Heres a breakdown of the yards resulted from either a WR reverse or fake.

97 yds of offense using the WR Reverse constraint. Almost half of the total rushing came from this one concept! Averaging 9.7 ypc when called, and again not once in overtime?