The Mississippi State Defense: Breaking It Down

After breaking down the Bulldogs' offense earlier this week, here's a preview of what to expect from the Mississippi State defense.

Share All sharing options for: The Mississippi State Defense: Breaking It Down

Alabama quarterback AJ McCarron simply does not get sacked. Opposing defenses have accomplished it only 9 times this season, including zero times in October. However, just like the LSU defense, Mississippi St. was able to accomplish the feat once. Below is a breakdown of the sack by freshman Chris Jones, and a general scouting report of the Bulldog defense.

This was on a first down play where Alabama had shown previously that they wanted to throw off play-action. The defense calls a stunt that crashes the strongside DE inside to either disrupt run blocking or in this case PA. Chris Jones loops around to the outside to contain the QB. The coverage is zone, probably Cover 2, and McCarron finds no one open. This play is as much a coverage sack as anything. 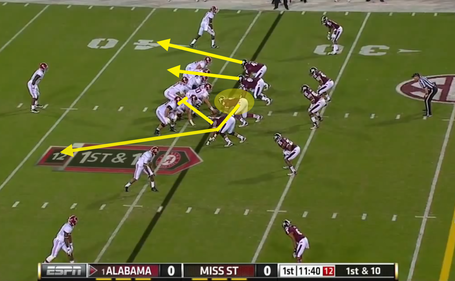 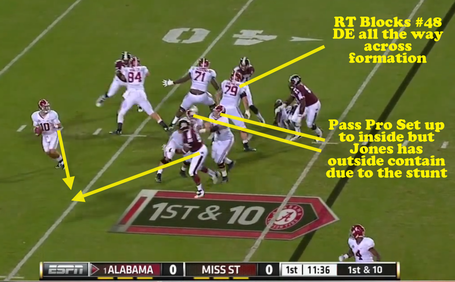 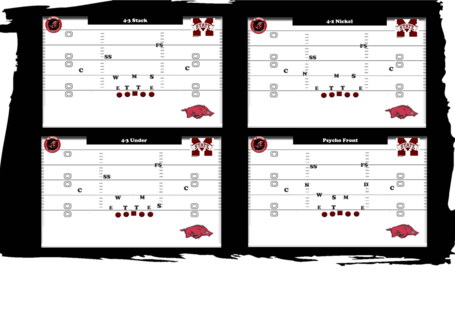 The under front and 4-3 stack are used primarily on 1st down and short yardage situations. #50 Mckinney is a solid MLB and will make it tough to run inside the tackles.

The Strongside LB #22 Wells is similiar to the Arkansas linebackers being somewhat undersized at 215 lbs. They like to use him to blitz off the edge and in coverage.

Identifying coverages from the TV broadcast is an extremely difficult task. QBS get paid millions of dollars to do this on the fly, and it has to be one of the most difficult tasks in all of sports. From what I can tell Miss. St. will be in a Cover 4 or quarters coverage, or if blitzing in a Cover 2. They will also play man in short yardage situations.

OC Jim Chaney will have a tough time running between the tackles against Mississippi St. Both LSU (223 yds), and Alabama (196 yds) were eventually able to break some big runs, but Chaney will have to be patient. In the passing game Mississippi St. has several DBs that have improved throughout the season. Safety #1 Nickoe Whitley likes to gamble at times and can be caught out of position. The biggest problem will be getting enough time to throw on 3rd down, where Miss St. likes to drop 8 and play coverage vs Alabama, or send all out pressure like vs LSU and Auburn. I believe that Brandon Allen actually struggles more when he has time to go through his progressions and has forced the ball in to coverage. When defenses have given him moderate pressure where he steps up or moves left to right and dumps it off quickly is where he has had more success.

Arkansas must get the ball in the hands of Hunter Henry on 3rd down. For this team a 3rd and 6 is equal to 3rd and 15 for most teams. Mississippi St will have 7 or 8 in the box on every down as they did against Alabama. Alex Collins and Jonathan Williams will be able to break some long runs, and the Razorbacks have to convert these in to points to win. For the Arkansas offense to have success they will need to be unpredictable and throw on 1st down in some situations. All around the Mississippi St. defense is solid, but Chaney does have some areas to attack.