Here's what to expect from Dan Mullen's offense

Share All sharing options for: Film Preview of the Mississippi State Bulldogs Offense

Mississippi St. should get the award for most moral victories this season. Like Auburn, this game was circled as a possible win in a difficult season. A win is still attainable, but Dan Mullen's team has been battle tested. They played Alabama close for 3 quarters, went score for score with Texas A&M losing by 10, trailed LSU by only 3 going into the 4th, and were ahead of Auburn 20-17 with under 2:00 to play subsequently losing on a pass with 10 seconds remaining.

The big question is who will be the QB. Dak Prescott has started six games so far this year and  Tyler Russell three. Prescott is the stronger runner, much different than Nick Marshall, Johnny Manziel or Connor Shaw. Straight ahead power running is his game without doubt. The Bulldogs gameplan will be somewhat different if Russell starts, being a more accurate passer and more experienced. Having two weeks to prepare could be a negative for this team in developing a gameplan. This season the Razorbacks secondary have had several blown coverages due to missed assignments or communication problems. A gameplan that will cover both of the QBs may be implemented, which means more coverages and responsibilities for these players to think about leading to mental mistakes.

Dan Mullen was at Florida for most of the Urban Meyer reign before leaving for Miss St. in 09. His style and play calling is very similiar to those Florida teams. If Dak Prescott plays there will be at least 3 references comparing him to Tebow. Some are accurate, in the sense that both are power runners, and were not very skilled at reading coverages.

Below are the main formations that Miss. St. has used this season. 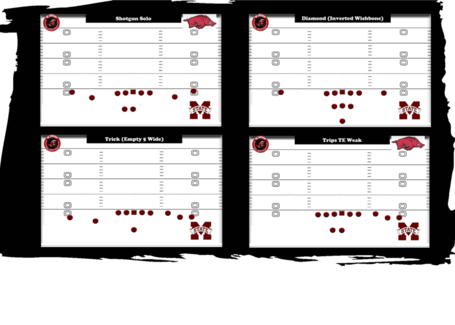 -The Shotgun Solo is their base formation, and they will run the wrap, trap, counter, Bubble Screen, Middle Scren and zone read with motions etc out of this formation. Below is the Middle Screen to #27 Perkins on 3rd and 10. 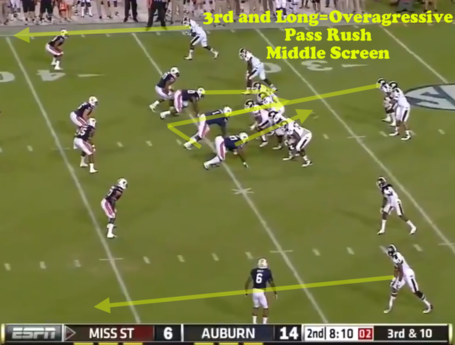 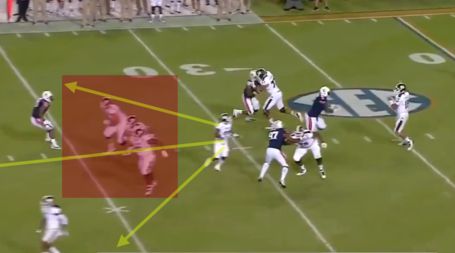 Taking advantage of the overagressive pass rush on 3rd Down.

-The Diamond is used as a big play formation. After a turnover, long punt return etc, Mullen likes to call something out of the Diamond. They can run all their base run plays like Zone read, power, as well as some Redzone specific plays like the one below. 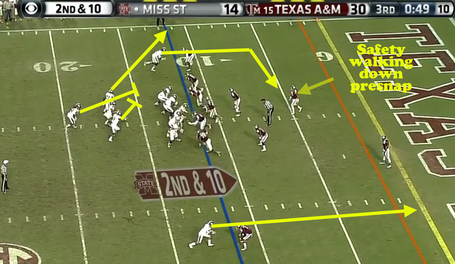 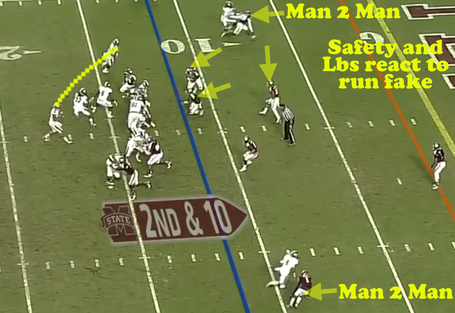 Perkins scores easily due to the earlier success that the Bulldogs had running the ball in the Diamond.

-Empty (Trick) is also used a lot in the redzone and short yardage situations. The main plays ran out of this form are the QB Power, Draw, and QB run fake P.A. pass. It will be tough to stop Dak Prescott inside the 10 if he is healthy. The play below was on the Tyler Russell run where he ended up fumbling in the endzone against Alabama. 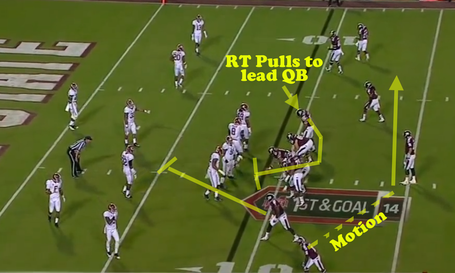 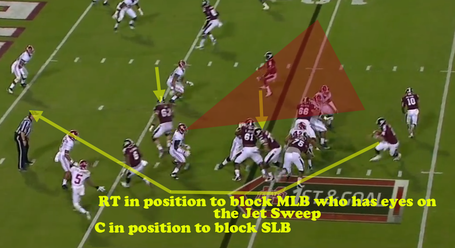 Jet Sweep action freezes the LB giving the QB room on the edge.

-Trips- Dan Mullen runs a version of Trips on every series. This next play (HB Wrap) is a staple of their running game, but also has another element added. It adds the Bubble Screen action with the trips recievers, and can be thrown at any time depending on the presnap read. These packaged plays are becoming more common. The name wrap refers to the backside tackle (#75) wrapping to lead through the hole. The QB carries out his zone read fake to hold the DE in position. 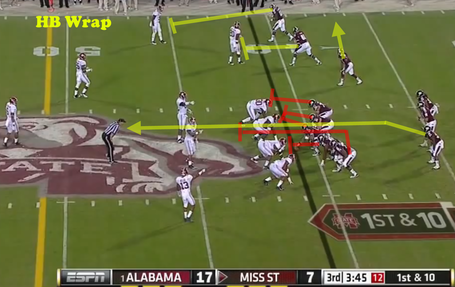 Alabama has 7 in the box and walks a safety down. They are still unable to keep Miss. St RB Perkins from gaining 8 yards right up the middle of the #3 rushing defense in the nation. The Bulldogs were not able to play with Alabama for 4 quarters but they have a solid running game that will give the Razorbacks trouble. 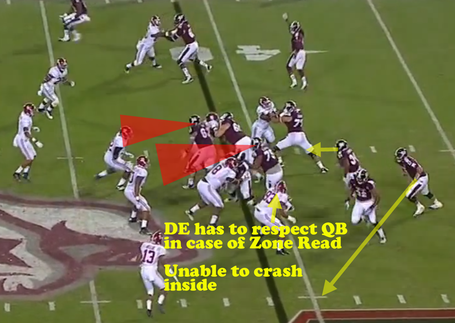 A key component to the Bulldogs offense is the play action where not only the backfield simulates run, but the lineman pull and pass block. This is extremely difficult for even the best linebackers to read. The LBs main key in most cases focuses on the Guards block, and if they read run and fill, look for some open receivers over the middle.

What to look for instead of watching the ball:

The Arkansas D will have to stack the box against LaDarius Perkins to have a chance. If Prescott can go, the QB runs will be even tougher to stop, and Mullen will most likely follow the Auburn gameplan of zone runs attacking the young Arkansas LBS.  In the passing game containing Jameon Lewis on short screens and outs is a must. This will be the most difficult task in the game. Playing Quarters coverage or Cover 2 with a huge cushion and expecting to tackle in space will not be effective. Getting pressure with Chris Smith and Trey Flowers up front, while being disciplined at the linebacker position will lead to some early 3 and outs. Brooks Ellis and AJ Turner must not be over aggressive in reading the blocks of the Miss. St. offensive lineman. Mississippi St. has struggled in the fourth quarter. If Bielema can keep it close down the stretch he can end the losing streak.