The SportsCenter Top Ten dunk was easily the highlight of Arkansas' opening game last week, but how did the Razorbacks set up the play? Let's break down the motion that led to the big moment.

Michael Qualls' dunk over a 6'10" defender was spectacular, and even more incredibly, it was a play set up by solid half-court offense. The Razorbacks under Mike Anderson have struggled in the half court in his first two seasons, but this play is an example of quick ball movement and dribble penetration, fundamentals of Anderson's offensive philosophy, as well as screens and floor spacing.

In the first image you will see #10 Bobby Portis has the ball after SIU-Edwardsville slowed the break.  # 24 Michael Qualls, #5 Anthlon Bell and #4 Coty Clarke have set up a double screen for Bell to get open for a 3 from the wing. Portis swings the ball to Fred Gulley at the top where he hits Bell coming of the screens. 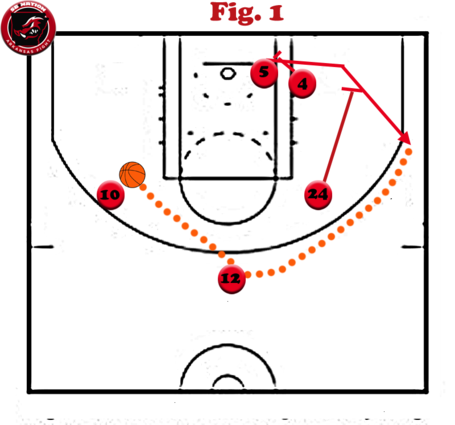 Bell does not have an open shot, and instead of forcing one he passes to Qualls in the corner where he has faded after setting the screen. In Fig. 2 you can see Arkansas has the SIU defense spread out. He uses a pump fake to beat the first defender (even though he was only a 22% 3pt shooter last season). Qualls then takes two power dribbles into the lane and elevates to finish the play. The help defender was slow to rotate and paid for it terribly. 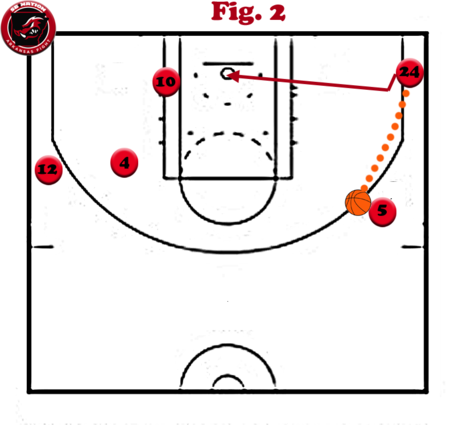 Better defenders will step outside of the restricted area to take a charge instead of challenging him vertically, but this play is a positive sign for Razorback Basketball in 2013-14. To quote Blake Eddins " OH MY Lord, What a dunk!".