1-0, technically. All according to plan.

Fans pretty much got what they were hoping for in the Razorback basketball team's first exhibition game Friday night. It was smooth and easy.

The Hogs took the lead after the first few minutes and cruised the rest of the way, but they still gave fans glimpses of what we could be seeing this season. 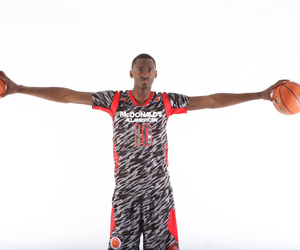 Bobby Portis had quite an impressive debut with 11 points and 10 rebounds for a double double - by halftime. He finished with 13 and 12. He only played 9 minutes in the second half. Portis, again, is 6'10", with really long arms, and the athleticism to move quickly and get high for a rebound. That's something Arkansas hasn't had in a loooong time. Very exciting.

Was he nervous about starting his first game? "Never" he said afterward.

Alandise Harris is, as promised, going to be the blue collar banger Arkansas hasn't had in a few years. He had four offensive rebounds and ten points. He'll keep a lot of plays alive this year. He's the type that will get a few different rebounds on one play and look like he gets fouled every time he raises his arms.

Portis and Harris both started. When they came out of the lineup for Jacorey Williams and Michael Qualls, the lineup got significantly smaller. What's crazy is that's about as big is Arkansas was able to go for the last few years. Arkansas is definitely going to be a bigger team this year.

Coty Clarke led the team in scoring with 14 points and was probably the most consistent player throughout. He was 4-for-4 from the floor and 6-for-6 from the free throw line. He also had 6 rebounds, 3 assists, 2 blocks, and 2 steals. A very complete performance.

The team's outside shooting started out hot, which was a pleasant surprise. At one point, the Hogs were 5-7 from three and the only misses were from Anthlon Bell and Fred Gulley, two of the guys you want shooting. The Hogs shot 56.8% in the first half when both teams were the most focused. Bell finished 3-for-10 from behind the arc, but that's okay. He finished with 13 points. He can shoot whenever he wants. He also drew a couple of charges, which Mike Anderson said after the game he likes even better than his shooting.

Kikko Haydar rebounded from a scoreless Red-White game to pitch in 11 points, and Fred Gulley went from being among the team leaders in the scrimmage to only scoring three points in his nine minutes. Mardracus Wade converted his only three point attempt, which was actually an out-of-rhythm shot after putting up a jump fake early in the first half. He finished with 9 points in just 12 minutes. Rickey Scott scored 7 points in the first half, and started (!) but only played 3 minutes in the second finished with those 7 points.

The team finished with 22 assists on 32 overall field goals, which is solid. Anthlon Bell noted after the game the team moved the ball around better than they did last year, and they did. Anytime that ratio is good, Anderson always points it out after the game. And he did that in his opening statement.

The team's defensive performance wasn't quite what you like, but again, a lot of the intensity that was there in the first half wasn't there in the second. SoMo only scored 37 in the first half. Still, 37 points isn't a bad first half performance from an SEC team, much less an MIAA exhibition team. It is worth noting, however, all five of SoMo's starters averaged double figures last season (none of Arkansas' did), so they're not a horrible offensive team. Take it all for what you will.

Anderson wasn't pleased with the defensive performance, of course. So hopefully they'll get better as the year goes on.

<blockquote class="twitter-tweet" data-partner="tweetdeck"><p>Anderson: Defensively we did some good things. We’re going to be able to score, so in my mind, our defense needs to get better.</p>&mdash; Bo Mattingly (@SportsTalkwBo) <a href="https://twitter.com/SportsTalkwBo/statuses/396465628858429440">November 2, 2013</a></blockquote>

The second half felt more like a scrimmage with Arkansas maintaining close to a 20-point lead throughout. The team tried to pass the 100-point mark on an alley-oop in the final seconds, but two Hogs jumped for the ball at the same time and crashed into each other, causing a turnover and a SoMo layup to finish the game.

Michael Qualls didn't quite get his highlight dunk. He did attempt a big one over two defenders but was fouled.

The next and last exhibition game will be Tuesday night against Northeastern State.