The Weekend That Will Be: Saturday Night's Alright

I hope your Saturday night is free...

Share All sharing options for: The Weekend That Will Be: Saturday Night's Alright

No need for an introduction. Tomorrow night is packed so do what you need to do. But do it early and get your popcorn ready.

No. 25 Maryland at No. 8 Florida State, ESPN (-17 FSU)- This is the first time 'Famous Jameis' will face a ranked team in his already celebrated career, albeit four games. Last week, the Winston "Doug Flutied" Boston College to take the lead at halftime.Both are undefeated with a tossup to which school has played the harder schedule. Take the Turtles's points in a game the FSU wins comfortably.

Georgia State at No. 1 Alabama, 12:21 p.m., SEC Network (-56 Bama)- This game pits two programs at the absolute polar opposite ends of college football. The Panthers, in their first year, are the worst team in FBS football with no wins. The Tide has 15 claimed national titles and is one of the most storied programs in the history of the sport. Watch it, but leave your money away from this glorified scrimmage.

No. 6 Georgia at Tennessee, 3:30 p.m., CBS (-10.5 UGA)- Tennessee is having its issues while Georgia is coming off its best regular season win in the Aaron Murray era. I would take Georgia all day long in this bet against a team that relied on a last-drive, endzone pass breakup to beat South Alabama last week in Knoxville.

No. 3 Clemson at Syracuse, 3:30 p.m., ABC (-13.5 Clem)- Welcome to the ACC, Orangemen; the New York ones, not the South Carolina orange men. Clemson is starting to separate itself as one of the best teams in the country. While the offense is good, its the defense that has been surprisingly remarkable. I like orange team with purple (Clemson) to win by more than two touchdowns and their ensuing extra points.

No. 10 LSU at Mississippi State, 6 p.m., ESPN (-9.5 LSU)- How will the Tigers respond after a hard-fought road loss last week? By crushing the Bulldogs. The Bayou Bengals still have a shot at Atlanta and will take care of business early and often here.

Arkansas at No. 18 Florida, 7 p.m., ESPN2 (-11 UF)- The writers on this site are doing some great work this season: Here's Brent Holloway's take on the season leading into The Swamp and Robert Boyd's What To Expect. It's hard to win on the road as a young team, especially against a defense like the Gators.I'd love to see an upset, payback for what happened in 2009, but for those of you looking to make money, take Florida.

No. 24 Ole Miss at Auburn, 7 p.m., ESPNU (-3 Miss)- Feels like last week's reality check set this team back a year in terms of rebuilding. Already having suffered greatly only a week ago in the state of Alabama. the Rebels get their shot at revenge on the Heart of Dixie. Ole Miss covers easily.

Missouri at Vanderbilt 7:30 p.m., ESPN3 (-2.5 Vandy)- Vanderbilt homecoming doesn't get your blood flowing? No one outside of the Music City and the Show-Me State will be watching, right? Au contraire... yours truly will be taking in the sights and sounds of Vanderbilt Stadium in my quest to see all of the SEC stadiums. I'm in Nashville for the weekend for work so recommendations are appreciated. For the sake of a good time, I've got the 'Dores

No. 22 Arizona State at Notre Dame, 7:30 p.m., NBC (-5.5 ASU)- Sun Devils coach Todd Graham isn't the most popular figure in football, but he has taken years off Brian Kelly's life due to stress. While at Tulsa, Graham beat Kelly's Notre Dame team in the biggest win in Tulsa's history. A year later, Graham was coaching at Pitt when the Kelly-led Irish relied on fourth-quarter scores to beat the Panthers at Heinz Field. The series goes back to Graham this week with a win in South Bend while covering the 5.5 points.

West Virginia at No. 17 Baylor, 8 p.m., Fox Sports 1 (-28 BU)- Art Briles and his offense everyone. The Bears are almost averaging a point for every minute they've played this season. The Mountaineers aren't stopping them or their shiny, all-gold helmets. 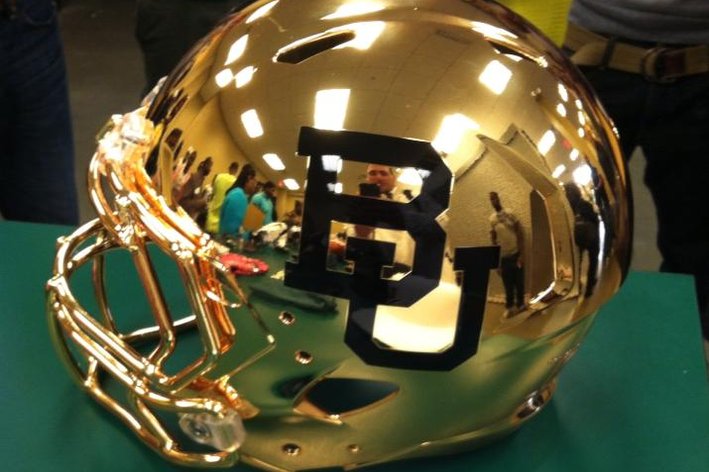 No. 4 Ohio State at No. 16 Northwestern, 8 p.m., ABC (-7 OSU)- What Pat Fitzgerald is doing as the coach at his alma mater is more impressive than Vanderbilt coach James Franklin's work. Fitzgerald has managed to sustain his run of top 25 appearances and is winning more consistently. I'll give you the Big 10's competition is no SEC, but recruiting up there and balancing a true two quarterback system isn't easy either. That said, take the traditional power to set them straight. Bucks win by a nine.

No. 15 Washington at No. 5 Stanford, 10:30 p.m., ESPN (-7.5 Stan)- I say it every week, but watch this Stanford team late night if you can. They play ball like Bret Bielema wants to play. Washington is looking to return to early 90s form and a win here would vault them into East Coast conversation, but I don't see it happening with the roll the Cardinal are on.