An appreciation of Jonathan Williams: The Arkansas Razorbacks' Danny Woodhead

Share All sharing options for: An appreciation of Jonathan Williams: The Arkansas Razorbacks' Danny Woodhead

I think Lynyrd Skynyrd would make an excellent coaching staff.

Why? Well, they're simple men. Simple men with simple beliefs. But in lieu of Syknyrd prowling the sideline with coaches' headsets, Bret Bielema should suffice as an adequate replacement on the Arkansas sideline. That's because Bielema has a simple offensive belief: your best players should touch the ball in every way possible.

At least, that's what he's doing with Jonathan Williams. After Williams had only caught two passes for five yards so far this season, Bielema and company moved Williams like an All-American chess piece last Saturday against Texas A&M, and he rewarded their faith in him by catching two touchdown passes. The Razorbacks have extracted value from him as a running back all season long - and now they're finding new ways to extract value from him.

One day later, diminutive San Diego Chargers running back Danny Woodhead also caught two touchdown passes on plays that somewhat mirrored Williams' two touchdown catches. In 2013, Woodhead has become one of the most versatile offensive weapons on a team that has revitalized itself offensively - and going forward, Jonathan Williams should be able to do for Arkansas what Woodhead has done for San Diego.

Take Williams' first touchdown from Saturday. He's lined up out wide on the bottom of the screen. 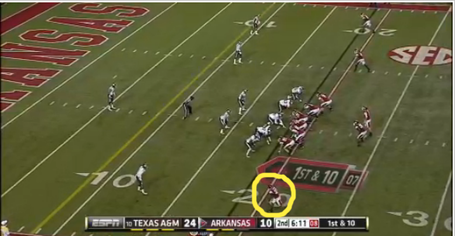 At the snap, Brandon Allen sells the play-action, and the Aggie cornerback is caught looking in the backfield. Williams heads straight for the end zone. 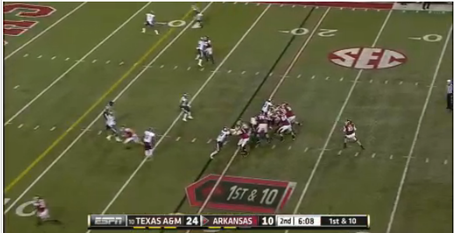 By the time Allen puts the ball in the air, the Texas A&M corner has darted backward into the end zone, but he's totally lost sight of Williams, who camps by the pylon and catches an easy touchdown - perfect execution from a running back who was tasked with playing wide receiver. 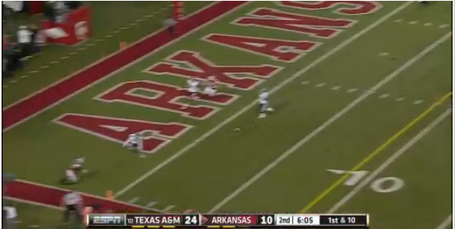 In comparison, check out Woodhead's first touchdown catch from last Sunday. He's lined up out wide, to the right side of the formation, as the middle receiver in the set. At the snap, he simply outruns the linebacker assigned to cover him, and looks back for the football right as he gets to the goal line. Touchdown. 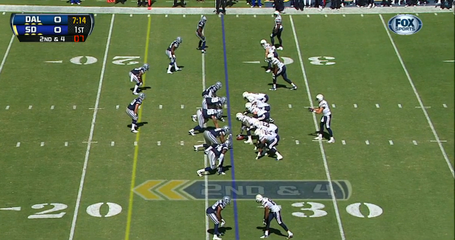 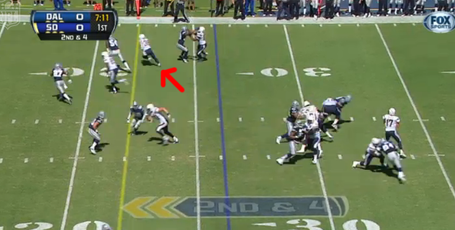 Again, perfect execution from a running back tasked with playing wide receiver.

But both can also make things happen out of the backfield, too - their repertoire includes that perfect blend of runner and receiver that allows them to be deadly anywhere on the field.

Williams' second touchdown came out of the backfield, where he lined up as the deep back and ran out into the flat, where he found himself completely uncovered. (Math seemed to let the Aggies down on this play.) 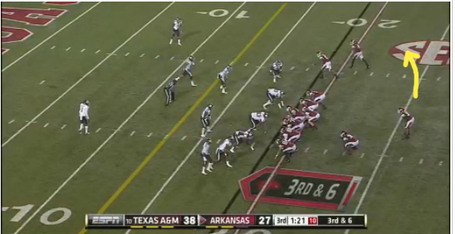 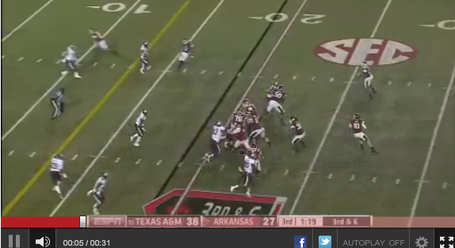 He catches the ball and is able to get a huge head start before he encounters a defender. From there, he makes one tackler miss, bounces off another, and bullies his way into the end zone for his second touchdown of the day. 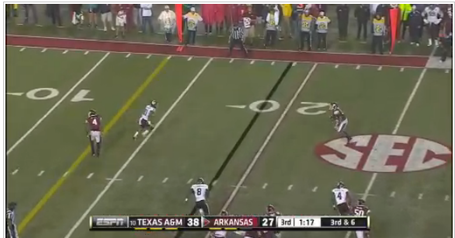 Woodhead's second touchdown in San Diego also came with him starting the backfield then running a basic wheel route - he sprints to his left, darts past a linebacker, and finds the football in the air.

Sure, it's a different play than Williams' touchdown, but it's the same flawless offensive execution in Fayetteville and in San Diego. And I'm sure Arkansas has this play in its playbook - remember how often Bobby Petrino used to run the wheel route?

As the season goes along, I expect the Razorbacks' one-two running back punch of Alex Collins and Jonathan Williams to become a dangerous hybrid where both players are on the field at all times. Because you can count on Williams as a roving Swiss Army Knife - like the Chargers count on Danny Woodhead - you can keep your best offensive players around the football 100 percent of the time. And that's a good thing. I think even Skynyrd would agree.