The DOINK Heard 'Round the World shakes up this week's rankings. Also, why you never want to play quarterback at Mississippi State, as if you needed another reason.

1) Alabama (8-0, 5-0 SEC, Last Week: 1)- Much has been made of Alabama's performance versus every other team but Texas A&M and in reality that game should be held against them. But look at these numbers compiled by the Tide in their seven other games: 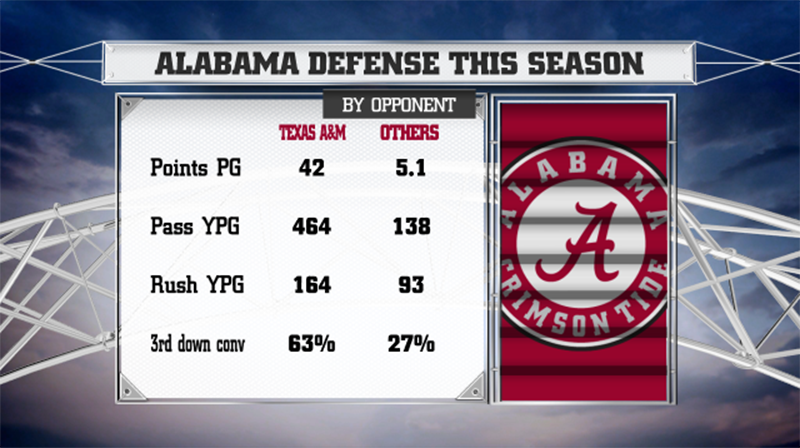 2) Auburn (7-1, 3-1 LW: 4)- A team that keeps winning will continue to rise in the Power Rankings. Then when it loses on the road this weekend it will subsequently fall (wink wink).

3) LSU (7-2, 3-2, LW: 2)- The Tigers keep scaring me early, especially since I usually have them covering the spread. Instead of remaining at the No. 2 spot this week though, they are punished and fall down a spot.

This was a big win for the Gamecocks, as they put the proverbial wrench back into the SEC East standings.

7) Georgia (4-3, 3-2, LW: 8)- Georgia-Florida in Jacksonville is home to the Largest Outdoor Cocktail Party. In a preemptive move, mixers are not allowed this year so fans can numb the effects from watching this game.

10) Tennessee (4-4, 1-3, LW: 10)- Saban remains undefeated against the Volunteers. And to think, some idiot (this guy) thought the Vols could cover in Tuscaloosa.

12) Mississippi State (4-3, 1-2, LW: 12)- Not the sort of recruiting tool you want to use when the winning quarterback gets this sort of treatment:

13) Arkansas (3-4, 0-3, LW: 13b)- The Razorbacks will face their fifth-straight ranked opponent this week, the longest stretch in school history. All we want is to better be better against ranked opponents (.200) than the Cardinals' bats were against the Red Sox.