Biggs Barker is a convicted cyber-criminal and former domestic wiretapper who also happens to be an enormous Razorbacks fan. He's been kind enough to take a break from his day job of stealing online credit card data to dig up some dirt on behalf of the Hogs. Enjoy his findings, but be sure to keep your computer passwords far away from his prying eyes.

How you know them: The team that beat Alabama in 2007 and almost beat Arkansas in 2008. Just to give you a refresher, in Bobby Petrino's first year, Arkansas scored the go head touchdown with less than 2 minutes left to go and watched as a ULM 45 yard field goal miss with 36 seconds left on the clock.

Home Team?!?!?!: You may or may not already be aware of this, but this is the last of 5 home games that Louisiana DASH Monroe has played in War Memorial Stadium going back to 2004. If you have any doubts, you can check out the ESPN Game recaps for 2004, 2006, 2008, and 2010. Even the 2012 game preview lists ULM as the home team. Those 50,000 hog fans have definitely been a boon to a team struggling to finding enough fans in their stadium, let alone a non-FBS opponent that will visit Monroe. Props to Frank Broyles and the rest of the athletic department for finding such a creative Home and "Away" series.

Strengths: Defense. Specifically Rushing Defense. in 2011 Louisiana MINUS Monroe allowed just 100 YPG on the ground which was good enough for top ten in the nation. They are tough to beat on the ground.

Weaknesses: Passing Defense. ULM had a little trouble scoring last season, but were even worse against passing attacks. They allowed a passing touchdown in all but two games, allowed 6 teams to pass for more than 250 yards including 300+ yards allowed against Louisiana Lafayette and North Texas. They were just that bad.

Primary Rival: Arkansas.... State. It was once the battle of the racist-to-Native-Americans-nicknames as both teams were the Indians and competed in the Trail of Tears Classic (The internet doesn't say it ISN'T called that anymore, but it's hard to find hard evidence that they still call it that). Though you can pretty regularly find a trail of tears heading south from Jonesboro in even years as the series has been pretty lopsided in Arkansas State's favor in recent years.

Third Year's the Charm: While the Louisiana-Monroe isn't calling for an upset victory over the hogs this season, they have been talking with a little more hope than the last time they came to Little Rock. Many of the Freshmen and Sophomores on the 2010 version of the Warhawks started then and are starting this Saturday. Todd Berry is entering his 3rd year coaching in Monroe and is hoping to improve upon his 9 wins from his first two years. His team has a lot more depth this season and he feels like they won't be as intimidated this time around.

"Some of that apprehension that was there as a freshman, I don't think our guys get caught up in that now, which is a great thing," Berry said. "When you play as many great teams as we've played over the last two years you start getting comfortable with that."

Losing Streak: Louisiana_Monroe has lost 9 straight games to the Hogs including 7 in Little Rock. ULM has also lost 13 consecutive non-conference games against FBS opponents. The last road win against ANY non-conference team was Saturday November 7th, 2007 in Tuscaloosa against the Crimson Tide. That's 1,767 days from that game to Saturday since a ULM player got on the bus after a non-conference road game feeling like a winner. Even if they were to pull off the upset on Saturday, they still have to wait another 7 days to try and end THAT streak. After all, it's a Louisiana-Monroe home game this Saturday. 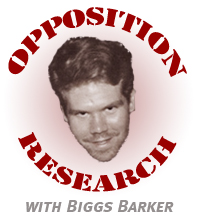 This has been another Opposition Research segment with Biggs Barker. Biggs doesn't need FOIA requests to dig up the dirt. Biggs will take next week off as we remind you why you should hate the Alabama Crimson Tide, but he's already got his digital fingers combing through endless pages of information about the Rutgers Scarlett Knights for the week after, because while the football team has to focus on one game at a time, Biggs has already moved on to the next game.