On Average, Arkansas Has Great Defense, and We All Laugh

Share All sharing options for: On Average, Arkansas Has Great Defense, and We All Laugh

I'm going to start with some core principles underlying the way I analyze football statistics.

Statistics are not meaningless; if they tell you the wrong story, you're looking at the wrong stats. 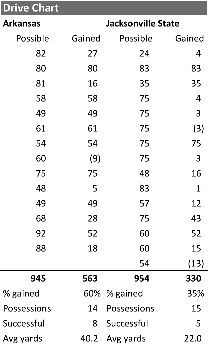 Here is a table I assemble after every Razorback football game. It shows each meaningful possession, excluding truncated ones at the ends of halves. Possible yards represent the beginning distances from the opposing goal lines. An Arkansas possession that starts on its own 25 is 75 yards away from the end zone. Then we have total yards gained on the possession. This is not the same as the yards gained that show up in the box score. In a box score, if the Hogs gain 15 yards, get a 15-yard penalty, then regain the 15 yards, Arkansas has 30 yards of offense. In reality, the Hogs gained 15 yards toward the goal.

On average, Arkansas had a successful night on both sides of the football. The offense gained 60% of the 945 possible yards; 50% is the typical dividing line between good and bad. The defense allowed 35% of the 954 possible yards for Jacksonville State. On average, that's great.

What doesn't get captured in stats is how effective the visitors looked on those five successful drives, the serious scoring threats. If you watched the game, you were appalled at how often Jacksonville State had receivers wide open -- not on every down, but at the moments where it really mattered. 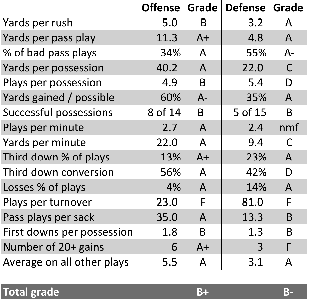 I cannot call the defensive performance a total failure, because it wasn't. Let's go through some performance measures, and it is easier to see what Arkansas did right and wrong on offense and defense.

Offense gained 5.0 yards, which might be fine if it weren't against an FCS opponent returning hardly any starters from what had been a mediocre defense. Tailbacks Knile Davis, Dennis Johnson and Ronnie Wingo ran 28-134, 4.8 average. The totals were pumped up by freshman QB Brandon Allen and his two great scambles.

Offense gained 11.3 yards, incredibly good. Tyler Wilson completed six passes that gained between 24 and 63 yards. Anything above 9 yards is world class. Bad plays (incomplete, interceptions, sacks) were just 34% of total. Below 40% is impeccable.

Defense permitted 4.8 yards per pass play, including the three sacks. And 55% of the opponent's pass plays had unfavorable outcomes, a pretty good number especially against a possession passing offense.

On defense, the Hogs allowed the Gamecocks to move the football five times in 15 chances, a good ratio. Five and a half plays and 22 yards per possession were far from dominating. Jax State piled up 81 plays and 20 first downs in its 15 drives.

Going to third downs too often was a major problem for the Hogs' offense in 2011. Jacksonville State was not much of a test, and the 2012 Arkansas offense only had nine third downs in 69 plays. Staying below 20% is desirable. The 56% conversion rate on third down was good but expected, too.

The defense forced 19 third downs out of 81 plays. Including two fourth down attempts, the visitors spent one-quarter of their offensive plays on third or fourth downs. But allowing 42% conversion on third downs was poor and one of the defense's major problems.

Arkansas's best achievement in any phase of the football game was big-play passing -- six big plays from Tyler Wilson to Chris Gragg, Brandon Mitchell and Javontee Herndon. On the other side, the offense was stopped for lost yardage on only 4% of its plays. Wilson had one sack in his 28 pass plays, with no interceptions (but a very strange fumble). Where the offense was at its worst -- three turnovers, one every 23 plays. That earned a grade of F in ball security.

The defense earned two F grades, by producing only one turnover in 81 plays, and by allowing three gains of more than 20 yards. Produce more turnovers, or eliminate big plays, and Jacksonville State likely would have scored far less than 24 points.

Johnson's decisions on kickoff returns were questionable. Johnson succeeded on one 42-yard return out of the end zone, but he averaged 13.5 yards on three others. Starting at the 25 isn't bad, is it?