A league of boring offense and brutal defense? The SEC defied its image in September.

Share All sharing options for: Defense First? Outstanding Is Routine For SEC Offenses

Three Southeastern Conference offenses scored at least five touchdowns per game so far in September, and none of them was named Arkansas. The unbeaten Georgia Bulldogs, with mind-boggling output from quarterback Aaron Murray, three strong tailbacks, and three equally impressive receivers, have 24 touchdowns. Top-ranked Alabama, while recording unbelievable defensive stats, has put up 20 touchdowns on offense. Texas A&M, Arkansas's opponent on Saturday, has 17 TDs in just three games.

Murray and Tide QB A.J. McCarron both are getting a preposterous 10-plus yards per attempted pass. Each has 10 touchdown passes. Murray already has passed for 1,000 yards.

Star quarterbacks are major reasons why Georgia and Alabama are leaders in our SEC offense magic quadrant. 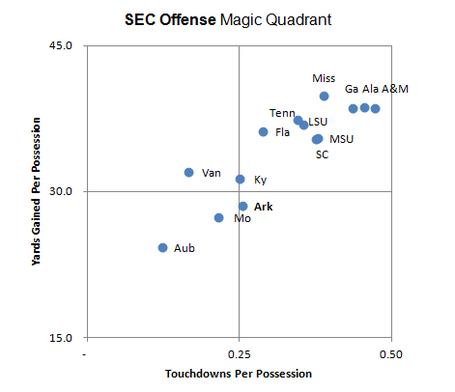 What is impressive so far in 2012 is how many SEC offenses are above FBS average. In recent years, only a few stood out. The above chart compares SEC teams on two efficiency measures: Yards gained per possession (how consistently they move the football), and offensive touchdowns per possession (how often drives result in 6 points).

The most surprising thing season to date: The Razorbacks are lurking down with Kentucky, Missouri and Vanderbilt among the league's less efficient offenses. And what has gone wrong is pretty easy to spot.

I thought Houston Nutt was gone! Ole Miss sits atop SEC rushing stats when it comes to yards per carry. Hugh Freeze has pieced together a grabbag of tricks that use the team's array of speedsters. Eleven different Reb-Bear-Thingies have carried the football.

Georgia has a more conventional assortment of tailbacks and has overcome a recent history of ridiculous attrition at the position. Freshman Todd Gurley leads the SEC with 102 yards per game, six touchdowns (tied with two others), and 9.2 yards per carry.

Despite the return of once-star tailback Knile Davis, Arkansas ranks dead last in the SEC in productivity from the running game. Ten teams are above 5 yards per carry, which used to be the bar for outstanding performance. Now it's routine. And the Hogs can't do better than 4.0. (To remind: These figures exclude sacks, which we count as pass plays.)

Arkansas has runners who average 5 yards per carry or better. Their names are Dennis Johnson and Ronnie Wingo Jr. They have 28 of the Hogs' 106 rushing attempts by backs so far in 2012. Davis, getting the bulk of the carries, is averaging 3.2.

Because of the unproductivity of backup quarterbacks during Tyler Wilson's convalescence, the Razorbacks stand mid-pack in measures of passing offense. Again, Murray and the Georgia 'Dawgs have been phenomenally good. Auburn, Kentucky and (surprisingly) Missouri are obvious downside outliers. Texas A&M, with freshman QB Johnny Manziel completing 67% of a bunch of dink passes, is hard to read. Most of the Aggies' stats were run up against SMU and South Carolina State. Florida held A&M to two rushing touchdowns.

Given that Manziel completed 24-31 against the Gators, and Arkansas is already giving up 62% completion on average...shudder.

Looking at the season to date, it's easy to blame Arkansas's struggles on the defense, which didn't make many stops in the last two games (and failed late against ULM).

However, the offense hasn't been remotely close to expectations. Here are some obvious problems that, if fixed, would yield great returns. 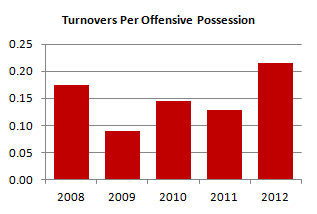 Arkansas has killed more than one-fifth of its possessions with turnovers so far in 2012 -- so far, 12 of them. SEC average for turnover frequency is 12% of possessions; Arkansas is second-worst, ahead of Auburn. And Auburn has the worst offense in the league. This makes no sense. Nothing in the Hogs' system or talent level explains the gush of turnovers. It's embarrassing.

2. Too many dead possessions, period. 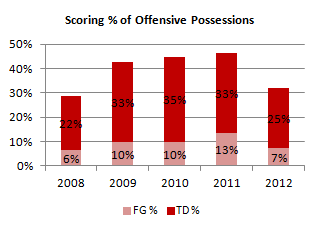 Turnovers explain much of the decline in scoring efficiency this season, killing 9% more possessions this season vs. 2011. But the frequency of punting has creeped up, and the Hogs already have failed on five fourth-down attempts. The 2012 Arkansas offense is boom-bust, with too much bust.

3. No big plays in the running game. 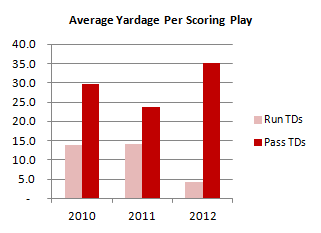 The longest touchdown run by a Razorback year to date was Davis's 9-yarder in game one. The Hogs had 11 breakaway scoring runs in the past two seasons. Thanks to Wilson and Cobi Hamilton, the passing game already has six scores from 20+ yards out -- compared with 10 in all of 2011.