Arkansas Football Already Was Bad Defense, We Just Perfected It

Arkansas's "season in limbo" coaching staff fixed the chronically bad run defense, and all it took was to make the whole scheme fall apart.

Share All sharing options for: Arkansas Football Already Was Bad Defense, We Just Perfected It 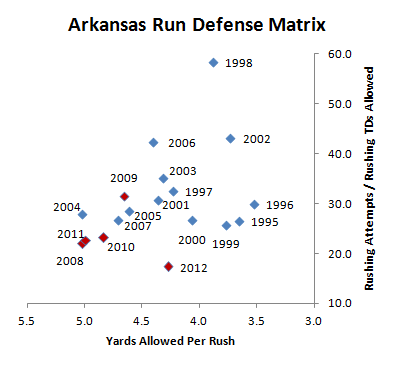 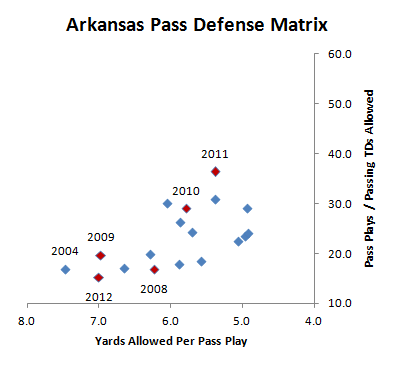 These two X-Y charts include statistics covering Razorback football since 1995, which is as far back as I can find team sack statistics. Sacks and sack yards lost count as running plays in NCAA stats, and they often conceal teams' true run defense. In these charts, sacks are counted as pass plays. Pass rush is a vital component of pass defense, and pass defense stats should include their effect.

I marked the Bobby Petrino years, plus the 2012 post-BP season in limbo, in red on these charts. Immediately, one notices two things:

Perhaps new defensive coaches Paul Haynes and Taver Johnson looked at recent seasons and thought Arkansas's stubbornly poor run D was a misfit with the SEC. Opponents such as Alabama, LSU and South Carolina had become the game's leading practitioners of power rushing offense. But right there, you see it: Average yards per carry and run-scoring porosity around the worst of SEC-era record.
In response, Haynes moved a defensive end to middle linebacker, an outside linebacker to strong safety, in an effort to get more physical on run defense. Players were taught a new emphasis on stopping the run first. On practically every down, every defensive player is reading his run keys first.
Voila, the results were instantaneous. Average yards allowed per rush, down to 4.3. If it holds up, the Hogs' lowest since 2003. At what cost? Well, so far the cost includes nine rushing touchdowns surrendered in four games, as well as some of the worst pass defense we've ever seen.
So far, the 2012 pass defense is pushing the dreadful 1990, 2004 and 2009 teams for worst-ever Arkansas pass defense. And this is with seven conference games remaining. 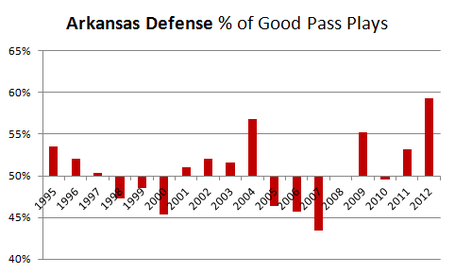 Here you see the problem. Arkansas's defense is not forcing opposing passers into enough bad plays. This chart shows pass completions as a % of total pass plays, including sacks. The moderately talented passers the Hogs have faced so far got favorable outcomes on almost 60% of their pass plays, which looks awful in context with history. Moreover, Razorback defenders have grabbed only one interception in four games and 160 passes. The 11:1 touchdown/INT ratio is unlike anything Arkansas fans have ever seen.
Something is bad wrong with how Arkansas's defensive secondary was put together, how techniques were taught, and how ineffectively they are playing zone and man-to-man defenses. This looks similar to 1990, when the Hogs were shelled by run-and-shoot offenses. Similar, except for this season's 312 passing yards allowed per game (40% higher than 1990). 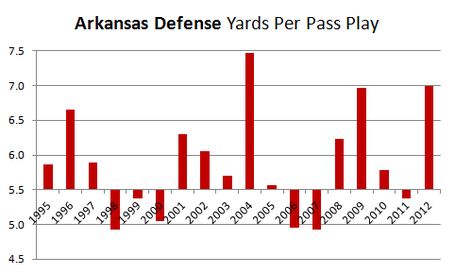 Big-play vulnerability also has returned. This chart shows passing yards allowed, net of sacks, divided by total pass plays including sacks. That 2004 team had it rough, starting a bunch of true freshmen in the secondary, supported by very little pass rush. What is the excuse in 2012? Coverage and pressure looked weak even before cornerback Tevin Mitchel was injured in game two.
But let's not forget to glory in the improved run defense. 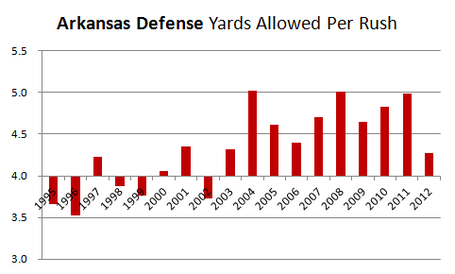 Boy howdy, the average yards given up per running play is down to 4.3, which would be the lowest at Arkansas since 2002. Let's finish with a little long-term historical context. Our last two charts are based on conventional NCAA statistics, with sacks buried in the run defense numbers. That's why they differ from the above figures. But it's the only way I can compare all Arkansas defenses since integration.
Yes, college football has evolved, and passing teams have gotten more sophisticated. But that does not give the whole explanation of why Arkansas's last five defenses are bunched up on the hind end of this chart. 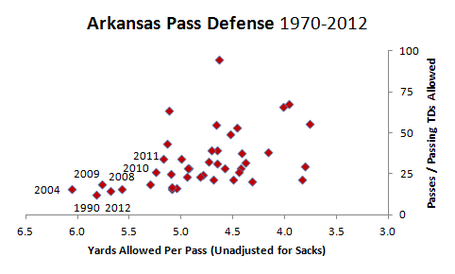 Have to give a shout-out to the 1977 Hogs, whose outlier statistics do not show up on this chart. That all-time great defense gave up one solitary touchdown pass in 227 attempts, with 43% completion, 4.3 yards per pass, and a TD/INT ratio of 1:17.
The 2004 and 1990 teams still hold solid leads, but '12 is gaining (losing?) ground fast. Don't worry, though. The improvement in run defense is worth it. Right? 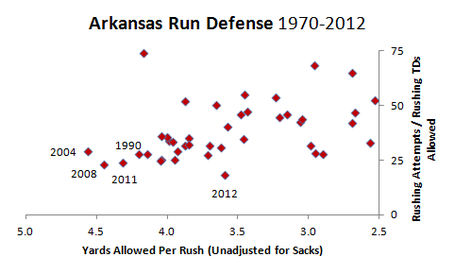 One little problem. Looks like this team is giving up rushing touchdowns faster than any other Razorback defense since integration.
Another outlier alert: The 1985 Razorbacks permitted two rushing touchdowns in 425 carries, while giving up a measly 3.0 yards per carry. The scale of this chart couldn't contain the sheer awesomeness of the '85 D. That team allowed about one touchdown per game, running or passing. The 2012 team will probably pass a dozen touchdowns allowed in the first quarter on Saturday, game five.