Rock Bottom-er: Shut Out At Home

Share All sharing options for: Rock Bottom-er: Shut Out At Home

It took something seriously, disgustingly ugly to supplant Miami 51, Arkansas 7, as the worst in-state performance by the Razorbacks in modern football history. It wasn't just that Alabama shut out Arkansas at home, a truly rare event in the era of two-platoon football.

In going down 52-0 before a remarkably full Razorback Stadium, Arkansas looked unpolished in most aspects of the game, making devastating blunders when passing, rushing, trying to punt, kicking a field goal, returning a kick, trying to tackle, trying to rush the quarterback, and trying to cover receivers. Ballcarriers fumbled eight times, losing three. And it wasn't even the wishbone, though the Hogs made some grimace-worthy attempts at running the option.

As has been true more often than not in recent years, the Hogs never found out what might happen if the typically conservative Tide had to play a game without being handed a bouquet of freebies. And as always, the tiring Arkansas defense yielded a half-dozen big plays.

During their 1-2 start to 2012, the Razorbacks' turnovers (10) rival their touchdowns (11). Five turnovers came in this game alone, and that doesn't include the first quarter snap over the punter's head, which set up Alabama for an easy first touchdown. It has become typical to see the Hogs blunder away any prayer of competing with Bama when staying close would have been a challenge under any conditions. 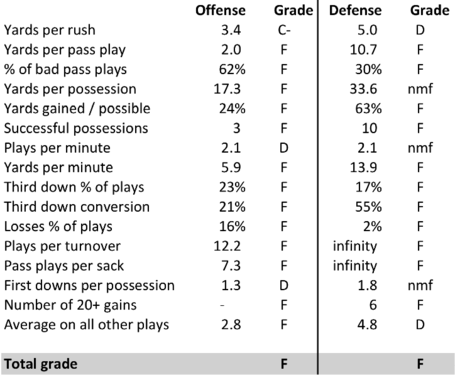 By any statistical measure, Saturday's defeat was a mismatch, the worst performance by an Arkansas football team that I have ever evaluated over a 30-year span. The only thing that Arkansas did half-well was run the football. This excludes the bad punt snap (which counts in conventional stats as negative rushing yards) and four sacks (which are really attempted pass plays). Against the Tide, fewer than four in 10 pass plays had favorable outcomes.

Without Tyler Wilson at quarterback, the Arkansas passing game has been a disaster for exactly 1.5 games. The combined numbers over that span: 17-45 (38%) completion, 1 TD/ 3 INT, 164 yards (3.6 yards per throw), plus five sacks. The offense looked exactly like what you'd expect from a team that spent a week planning for three different quarterbacks, one who couldn't even play. Nobody was ready. And the idea of putting in some brand-new plays for Brandon Mitchell...sheer desperation. 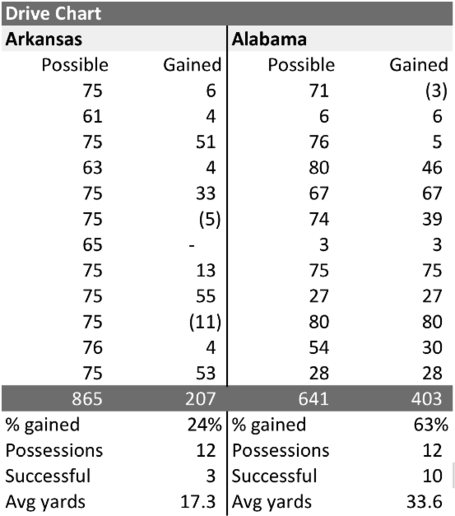 Here is the drive chart, portraying both teams' potential and actual yards gained. Alabama was outstanding; 63% is dominating in a 2005 USC kind of way. Arkansas...I have never seen a Razorback team held to 24% of its potential yards. Only three Arkansas possessions moved more than halfway toward the goal, and they all ended with some kind of crushing blunder.

This is the kind of game a team has when 1) it plans for months for a showdown in the first SEC home game, 2) several key players get hurt, 3) lack of attention to an opponent blows the "showdown" setup out of the water, 4) the big game week is consumed largely by replacing injured starters and rewriting the months-old game plan.

To be blunt, it's going to be extremely hard for this Arkansas coaching staff to reorganize the remnants of this football team in time to deal with the serious threat of visiting Rutgers next Saturday. If Tyler Wilson returns to start at quarterback against the incredibly tenacious Rutgers defense, somebody with play-calling responsibility is going to have to give Wilson some help. This offensive scheme absolutely must give up the practice of letting the quarterback take body and head shots in exchange for sending more receivers downfield. The short-term gain is far too risky now.

On offense, Rutgers looks like a team that Arkansas's defense could manage, if it is not shorn of what self-respect existed after Louisiana-Monroe's 103 plays. But it is hard to believe the defense won't incur more injuries if Paul Haynes cannot find a way to get some substitutes onto the field now and then.

Special teams were so bad against the Tide (why was a new deep snapper playing in a rainy game, for that matter), the Arkansas coaches could spend a day or two fixing all the mistakes there alone. Ball security is a problem everywhere -- run, pass, special teams -- and will be urgently important against a Rutgers team with a 2:1 takeaway/giveaway ratio.

Probably the biggest challenge for Arkansas coaches this week will be re-establishing team goals. What objectives will pull this team together after the upperclassmen saw their goals all but ruined by mid-September? The next three weeks bring Rutgers to Fayetteville, followed by road games at Texas A&M and Auburn. Blood is in the water now. Every opponent will be emboldened by the Hogs' weakened condition.

Does John L. Smith have anything left? His performance to date suggests that he viewed Arkansas as a financial lifeline, a windfall to rebuild his ruined retirement savings. It is difficult to detect anywhere on this team where Smith is adding value. Somehow, somebody has to assume control of this football team, or its collapse could doom Razorback football to a multiyear rebuilding process.

Rumors overnight suggested that Smith might step down in shame. Hard for anyone to hold his head up after a coaching performance like the past two weeks. Without Smith, Arkansas would be where it was three weeks ago, a football team without a leader.