Season in Limbo, Game 1: That Storm Overhead Is Not a Metaphor

Share All sharing options for: Season in Limbo, Game 1: That Storm Overhead Is Not a Metaphor

Ever since Bobby Petrino ran his heavy metal thunder into a Pig Trail ditch, Arkansas football has been in a strange state of limbo. Sure, his mentor John L. Smith was brought back to interim-CEO the Razorbacks through what had looked like their most promising season in a generation. But Hog fans are torn every which way. If the 2012 Porkers are as good as they ought to be, what are fans supposed to do? Keep hoping Jeff Long hires another genius coach? Pine for what we lost?

Count the national media as similarly confused. ESPN's SEC bloggers are so confused, they rated Arkansas third in their week one SEC power rankings while voting them fifth in the league in their site's national poll. The recent SportsNation poll offered five teams as possible SEC champs, none of them the Razorbacks. SI's Andy Staples demoted the Hogs from No. 6 at the end of 2011 to fourth in the West, based solely on the absence of Petrino.

Anyway, it seems just about right that Saturday's season opener is 1) against Jacksonville State, coached by another summarily dismissed Arkansas coach, and 2) the hours before kickoff might enjoy a visit from the remnants of Hurricane Isaac.

There. That's all the groaning and regretting I am going to do. Let's analyze what needs to go right for the Razorbacks to improve on their 81% winning pace of the past two seasons.

Arkansas has a history of persistently weak defense against the run, which kinda matters in the rush-first SEC. Even in the reasonably decent 2006 season, the Hogs were no better than fourth in the league in run defense, best performance since 1998. In the past five seasons, Arkansas on average gave up 5 yards per carry to opposing runners. I need a picture to show how bad 5 ypc run defense is. 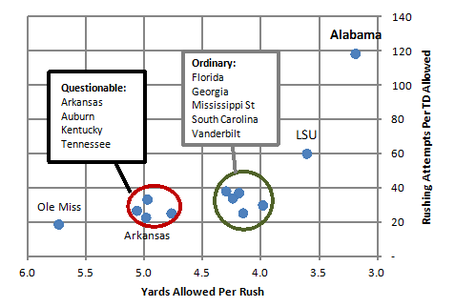 The chart portrays 2011 SEC defenses on two key measures: Yards allowed per rushing attempt (excluding sacks), and opponents' total carries divided by rushing touchdowns, how many carries it took them to score six on the ground. If nothing else, this chart explains what was great about the national champion Crimson Tide. And what wasn't so hot about the Ole Miss team that got Houston Nutt fired again.

LSU was not quite up to Alabama's standard but clearly stood out. In the middle are two lumps, hovering around 4 and 5 yards allowed per carry. The Razorbacks were right where they had been since that last squirrely Reggie Herring defense in 2007. Arkansas in 2011 surrendered 21 rushing touchdowns; only one SEC team (Ole Miss again) gave up more. The Hogs allowed one run TD for every 23 rushing plays, more than 5x as often as Bama.

The Cotton Bowl victory over Kansas State -- 3.5-yard average on 33 running plays, one touchdown allowed -- might have shown dramatic improvement by a Paul Haynes-led defense over the Willy Robinson plan that had been steamrolled by LSU. Or maybe it was a case of K-State scoring most of its 34 rushing TDs against Big 12-caliber defense.

What can Hog fans expect in 2012? We could point to departed seniors (Jake Bequette, Jerry Franklin, Tramain Thomas), or note that ends Bequette and Tank Wright missed much of the above with injuries. Wright now is slated to start at middle linebacker alongside fellow senior Alonzo Highsmith. Both players have missed most of August practices with injuries. Despite some graduations, the depth chart for the defensive line and secondary look more experienced than they did over the past few seasons. More important, Haynes has focused his system on thinking less, gang-tackling and disrupting the run.

You don't see good football programs allow 5 yards per carry on a consistent basis. And Arkansas won a bunch of football games without patching this sore spot. How good could the Razorbacks be with all the game-shortening, field-position advantages of even acceptable run defense? Hope we find out.

2. Third Downs Are Hard. Avoid Them.

Arkansas's offense retained much of its punch in 2011, despite the quarterback transition from Ryan Mallett to Tyler Wilson and the absence of all-SEC tailback Knile Davis. The Hogs scored on 46% of their offensive possessions, slightly more often than in 2010. Average yardage gained per possession stayed nearly the same, and first down frequency was unchanged. The Hogs gained first downs on 42% of their third downs, slightly improved over the previous season.

But the offense with Wilson at the helm slipped in two key areas, one of them being how often the team had to face third downs. 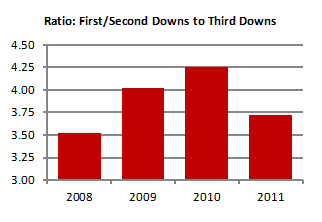 This chart shows Arkansas's total offensive plays run on first and second downs, divided by the number of plays run on third down. In 2008, the Hogs faced third and long situations often, a big reason why Casey Dick was sacked a bajillion times that season. The next two seasons, Arkansas was much more successful gaining yards on early downs, sometimes driving for touchdowns without facing a third down.

Last year, third downs made up 21% of the Hogs' plays, up from 19% in 2009-10. The increased number of plays per drive indicated some slippage in the offense's big-play production, leaving more possessions ending with field goals. 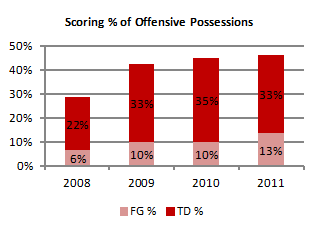 Reasons why the Hogs faced so many third downs: An increase in penalties, due largely to offensive line play; inconsistent run game production; sacks, attributable to protection and QB play. Wilson led the offense to convert an heroic number of third downs, but wouldn't the odds be more favorable with fewer third downs?

Arkansas stands a good chance of improving on early offensive downs, given the return of Davis and continued maturation of Wilson and his Oline. See, reasons for optimism are springing out all over.

3. This Offense Is Supposed to Make Big Plays.

Mallett put up some amazing numbers at Arkansas. Most impressive to me were his 15 touchdown passes of 20+ yards in 2010. Wilson added four in the Auburn game alone. Seemed like big-play production would stay in good hands. 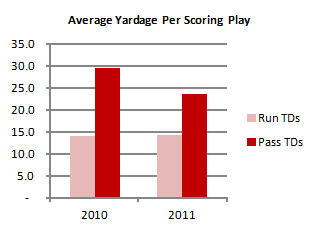 This chart compares average yards gained on touchdown-scoring plays, whether by run or pass, in 2010 and 2011. Last season, the Hogs had only 10 scoring passes that covered at least 20 yards, and 10 fewer TD passes of any distance. Total rushing touchdowns actually increased, as did the yards per rushing TD.

The Hogs had to grind their way to more scores last season (23 red-zone touchdowns, 27 field goal attempts). Adding the breakaway threat of Knile Davis to the proven production of Dennis Johnson should help on the ground. Passing is more of a question, without the threat of Joe Adams and Jarius Wright. Going with size over sheer speed at wide receiver might help Arkansas counter the containment tactics of SEC defenses. Given the turnover at the wide receiver positions, TD pass production is one area where I'll believe the 2012 Hogs are better when I see it.