A Razorback Looks At Thirty

Share All sharing options for: A Razorback Looks At Thirty

I can hear you call

I'm going to resist the urge to completely rewrite that song to give it a Razorback theme because I think 99% of song parodies are incredibly cheesy. Sure, I thought Weird Al was cool back in junior high when "Amish Paradise" came out. But that was then. Now, I turn 30 on Wednesday. Friends and family older than me laugh when it's brought up. "You're still a baby." "You've got so much to learn." Meanwhile, friends who haven't yet hit the mark talk to me like I'm their first friend to lose his virginity. "Is it weird?" "Are you handling it ok?" "I'm so scared!"

I'm here to report that all is well - somewhere between fantastically well and close to spectacular. But hitting this milestone is cause for reflection, and like many people, one of the most meaningful relationships I have is that with my favorite sports team. It feels like an apt time to share my favorite Razorback story, and like any healthy person turning thirty, hopes for the future.

I was fortunate to attend some amazing Arkansas games in recent years. I was there when College GameDay came to see Darren McFadden run all over Tennessee. I was in the same corner London Crawford caught Casey Dick's last touchdown pass against LSU. But my favorite day as a Razorback fan? The day I spent in Athens, Georgia in September 2010.

The Wife and I have been working on fulfilling a quest we began in 2003 to see games played at each SEC stadium. However, if Razorback fans had known the string of football atrocities I'd witnessed since it began, I would be barred from ever leaving the state. Here's the rundown:

So by this point, I'm scarred. It was a noon kickoff and the Georgia campus is completely stunning. The Wife and I had been out late the night before enjoying what Athens is known for offering, but the energy surrounding the game was more than enough to keep us going. Sure enough, Arkansas was in complete control through three quarters, but like four of the previous road trips I went on, everything was falling apart. When the Bulldogs got the ball back with the chance to take the lead and only a few minutes remaining, I couldn't watch. I sat down amidst a group of Razorback fans still standing. By this point, I thought it was my fault. "This can't be happening again! I can't travel to anymore games! I won't go anywhere ever!"

Somehow, Jake Bequette knocked the bejesus out of Aaron Murray, UGA's All-American punter shanked it, and Arkansas got the ball back with a little time left to go. You know what happened next. Mallett to DJ, Mallett to DJ again, Mallett found Childs on the sideline, then it's all a blur. I just remember jumping, hugging, high fiving, screaming, and general delirium. We stayed late and sang with the band. For some reason, we were allowed to go down to field level and celebrate next to UGA's famous hedges. I might've clipped a leaf for commemoration. Here I am celebrating post game: 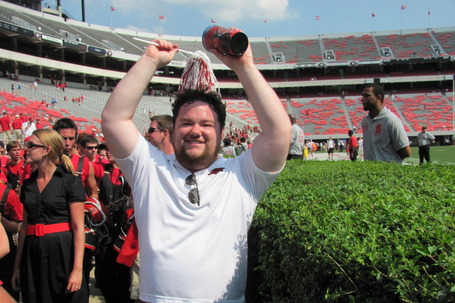 And since it was the early game, highlights were played all day. National writer after national writer said they had to make plans to be in Fayetteville the next week for the Alabama game. When we ventured back to downtown Athens that night, the feeling was nothing but pride. Not only had Arkansas won a road game, which going into the game was something people were questioning Ryan Mallett's ability to do since Arkansas lost each road game in 2009, but Arkansas had done it against an SEC blue-blood. If that day was a drug, I'd be an addict.

So if I can have one sports wish for my birthday, it's to have more days like that. Winning games at home is fun, but winning on enemy territory is incredibly sweet. The harassment normally received from the home fans turns to sullen silence. They have been conquered, and you are a part of it. The only thing that kept the day from being perfect was watching hated Auburn pull out an overtime victory against Clemson from an Athens bar that night.

I also want to finish my quest. I'd have gone to Vanderbilt in 2011 if it wasn't for an immoral fall wedding I had to attend. So I still need to make it to Vanderbilt, Auburn, and thanks to expansion, Texas A&M and Missouri. That's the to do list.

And like all fans, in my next thirty years (hopefully sooner), I want to see another national title. I had just turned 12 when Arkansas won the championship in 1994, and took for granted that the Razorbacks would always be in that position. I thought basketball was like track, only people really cared about basketball. Well, funny story, it didn't work out that way. But now that the athletic program is in it's best shape since the 1977-78 season when Arkansas finished 3rd nationally in football, basketball, and baseball, I feel like I've got a good shot. I moved to Northwest Arkansas in July 2011, and I'm not taking for granted that I'm living here at such a great time to be a Hog fan.

It's harder to fear the future when expectations for your favorite team are so high. Sooie.

Doc Harper is a contributor to Arkansas Expats as well as ArkansasSports360.com. Email him at heydocharper@gmail.com and follow him on Twitter @doc_harper.