At 2012's midpoint, a host of teams are pushing to join Alabama and LSU among the ranks of great SEC defenses. The Bayou Bengals left the door open by losing domination against the run.

At the midpoint of the 2012 regular season, the group of "haves" among Southeastern Conference football defenses has expanded. Alabama and LSU remain outstanding in their ability to shut down opposing offenses. But the league's stingiest defense on the scoreboard is neither of the above. At least, according to the way I measure 'em. 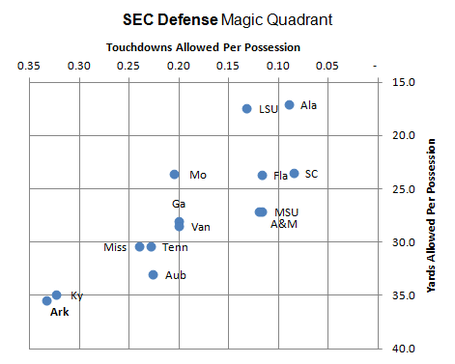 This chart measures SEC defenses on two vital qualities: Yardage and touchdowns allowed per possession. Teams that give up a lot of yards but not many points always eventually break down. We use per-possession stats because of vast differences in teams' schedule composition and styles of play. Teams that do not control time of possession on offense, or which score quickly, create more possessions for their defenses to handle.

Case in point: Alabama's defense spends a leisurely 11 possessions on the field per game. Tennessee's suffers through 14.

Here we find that, not only have the Gamecocks allowed touchdowns less often than the Tide has, but also three other teams are besting LSU in scoring defense. We have doubts about how Mississippi State and Texas A&M will hold up through the second half. But the Florida Gators and the Cocks are pretty well tested by now.

It's remarkable that, after holding Auburn to a single touchdown, Arkansas only eked its way back onto the distant edge of the SEC defensive map. Arkansas and Kentucky, the league's two worst defensive squads, meet Saturday in Fayetteville. 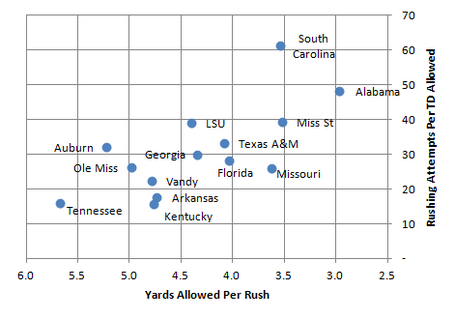 Our run defense matrix has changed dramatically since the beginning of the season. Alabama has been remarkably stout, allowing slightly under 3.0 yards per rushing play (excluding sacks). While South Carolina isn't quite as dominating per play, it has given up only three touchdowns in 184 rushing plays.

One of the biggest surprises is finding LSU and Georgia in the middle of the pack, both allowing well above 4 yards per carry. So far this season, Mississippi State's run defense stands well above many of the teams that were supposed to be better.

Despite its conference-best 25 quarterback sacks, South Carolina is not among the top three SEC defenses on a per-play basis. Five SEC teams are playing great pass D, going more than 70 pass plays for every touchdown pass permitted. Florida is best at 1:94.

On the opposite end of the universe, Arkansas has done some things rarely seen in the civilized world. The Hogs are the only SEC team that has surrendered 2,000 passing yards this season. The four interceptions vs. 15 touchdown passes allowed ratio is so bad an outlier, I checked it three times to make sure it wasn't a typo.

The 7.3 yards allowed per pass play would be the Razorbacks' worst mark since 2004, which itself was a milestone season for really bad defensive football.

Our next piece will review SEC offenses at the 2012 midway point, and then we'll make some guesses about whether Arkansas can salvage the season.