Jeff Long gave standard political non-answers as much as possible when he visited the gathering in Little Rock on October 15th. Here's what he was probably actually thinking and wishes he could've said. Think of this as Jeff Long having Charles Barkley's candor.

Share All sharing options for: How Jeff Long Wishes He Could've Answered Questions From The Little Rock Touchdown Club

Does Bobby Petrino's no-compete clause stay in effect since he was fired with cause?

Let me be clear: I don't give a damn what he does. He ruined my year. You might not have noticed, but we've got a $40 million dollar hole in the ground behind the stadium in Fayetteville. I'm not an idiot, I know you guys aren't going to keep donating for a losing team, so I've got to find a good coach, convince him to come to Fayetteville, and fundraise all at the same time. My year has sucked. I hope he does go to an SEC team so he can turn into someone else's problem. That would be a competitive advantage for us.

Would a candidate who owns a motorcycle be ruled out?

Motorcycle? No. Just don't hire the mistress, and if you do, don't lie to me about it. Then we'll be cool. But bankrupt? Yeah, I'm not putting up with this mess again.

Deal with it. The uniforms are for the players, recruits, and folks that buy merchandise from Hog Heaven and similar stores. In case you didn't notice, we won 49-7 in the gray jerseys. We can wear them every week if we win like that. Am I right? I mean, those basketball teams from the mid 90's you guys keep telling me about had black on some of their unis. Look: 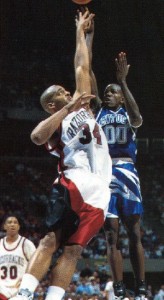 Keeping two games in Little Rock, yes or no?

1. After the year I've had, you expect me to commit to things that happen after 2016? Seriously? You think I don't know that if this coaching search thing doesn't go well, you guys will run me out of town with torches and pitchforks? Hell, a lot of you want me gone now. So, no, I'm not too concerned with things that happen five years from now.

2. If I did have to make the choice today, yes, I'd absolutely move the games to Fayetteville. You guys aren't even filling up your stadium down here, and even with the pathetic student section we've got on the hill, we still have more people in the stands and look better on TV than this place does. Now, I realize I have to keep some of you happy because you've got lots of money, so what I'll probably do is offer one of the non-conference games to War Memorial and see if they'll take that deal. If they do, fine, it's not like Hog fans will drive to Fayetteville for three/four cupcakes each year and I don't blame them for that. But if War Memorial says no to the deal, then they're the ones who turned it down. It's a win/win for me. But the conference game is absolutely getting moved. If you hadn't figured that out from things I've already said and done, don't know what to tell you.

Did you expect such a difficult transition to John L. Smith?

Of course I did. That's why I made the brilliant move to hire him. Remember, the university's saving a few million dollars by having him do this thing for 850 grand. You get what you pay for. Hopefully, we can use that extra cash to help lure a good coach. Hopefully.

Was there any thought to going a different direction after the A&M game?

Not gonna lie, I started looking around at beach houses, mountain lodges, etc. Or just a Hangover-style Vegas weekend would have been nice. Something fun to get out of town. Oh, you mean by firing L? Nah. Who would we hire? And who would do it for 850k?

I have to say, in retrospect, hiring a coach who is $40 million in debt should have been a red flag. But, really who could have known a guy who never made a couple million a year could possibly be in that much debt? It's not attention we like, but after April, I can confidently say we've been through worse.

Is it a distraction to the program?

Sure it is, but like I said, when your successful coach wrecks his motorcycle with a volleyball player he'd secretly hired on it, bankrutpcy seems like small stuff.

Again, no. How could you? You think our football program was an inconceivable dumpster fire in September? It still wasn't as bad as his financial decisions. How do you even get that much to lose?

What phase are you in, in the coaching search?

The "finding one" phase.

Do other schools having difficult seasons complicate your search?

Only if they outbid us. But hopefully, they'll fight over Petrino, so we won't have to worry about them.

Is John L. still a candidate?

As far as he knows, he is. But since he's not here today, no. Seriously? Did you see what happened in September?

How different is the hiring situation you're in than the one you inherited in 2007?

Jim Grobe is much further down the list this time.

What do you have to sell? How much different is the Arkansas job now than in 2007?

We got cash, yo. Fat stacks. We're building buildings. We're not stuck with buyouts like our competitors. Making it rain, yo.

Will you consider the current talent in place on campus in your choice? A lean toward the offense or have you looked at needing to start over with a completely different philosophy?

We're looking for a coach whose philosophy is winning. And we might interview some on the current staff, but really that would just be a nicety.

Does this job require someone with proven experience?

Well, yeah. I'd like to hire a coach who has coached before.

Does the way the team has played so far concern you in your search?

I want a coach with a big enough ego that he's not scared of inheriting a bad team or getting stuck in a challenging division. We want a coach who thinks he can take Toledo to the BCS. We just have to watch their hiring habits.

Besides the research, what are you using the nine month head start advantage to do?

I've been watching a lot of Monday Night Football [wink}. Hey, look how quickly I can make Hogville explode just by saying that! Pretty cool!

Paul Finebaum says this is the most important hire of your tenure. The biggest decision in Arkansas history?

What coaching hire isn't the biggest in program history? Every time you hire a coach, you're setting the course for the program for the next 5 years minimum. It's like in every presidential election how they say this is the biggest, most important election ever, well, at least since the last one.

How much did you learn five years ago about hiring a football coach?

I learned it's much easier in the long run to hire a good coach than to settle for Jim Grobe.

You mention coaches looking for raises. Do you have good examples?

Oh yeah, like every coach who has ever pretended to be interested in a job, even to the point that the media reports it as being done, then backs out when he's offered a bigger contract at his current job. This should not be a shock to you guys. How many times have you reported someone as being hired only for it to not happen? [a few hands rise]

Doc Harper is the editor of ArkansasExpats.com and is a columnist for ArkansasSports360.com and CollegeFootballNews.com. You can email him at heydocharper@gmail.com and follow him on twitter @doc_harper.